DISCLAIMER: I have put this project on hold to focus on another project. As such I have put the ~15 min alpha here for everyone to try out. I do not currently have any plans to continue development on this title.

Zombies in Space, is a 2d, sci-fi, metroidvania style shooter coming to PC and Nintendo Switch.

Follow the game on Kickstarter: Zombies in Space by Arcbound Games — Kickstarter

In the year 2133, humanity has colonized a world beyond our solar system. Made possible by a faster than light engine discovered and solely owned by the Mezen Corporation, colonists have settled on the only habitable planet in the Alpha Centauri system and named it Aurora. To facility research, logistics and trade, a giant space station was constructed in orbit by Mezen, and now is home to tens of thousands.

Humanity was not the first race to call Aurora home, as the surface is covered in decaying runes of a long dead, technologically advanced civilization. What killed this ancient race was never discovered... or so we thought. Mezen, who had long known the truth, was running experiments upon the culprit, an invasive organic organism, aboard their orbiting station. Believing the organism to be dead or dormant, the Mezen's scientists accidently awoke this ancient horror and it began to infect all organic matter aboard the station.

All that remains of an infected victim after the organism removes what it needs. The crawler zombie is a fast, but weak zombie.

More alien than human, the spitter zombie is a victim undergoing mutation into something horrible. They have a ranged spore attack designed to infect anything it touches.

One of the possible end states for the organism's mutations in human, the Ent is adapted to look like the native foliage on Aurora. Massive in size, this zombie is the first boss of the game. 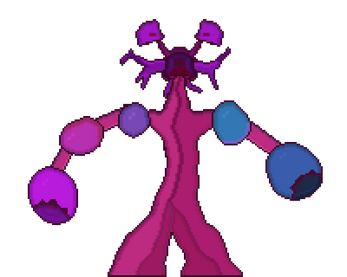